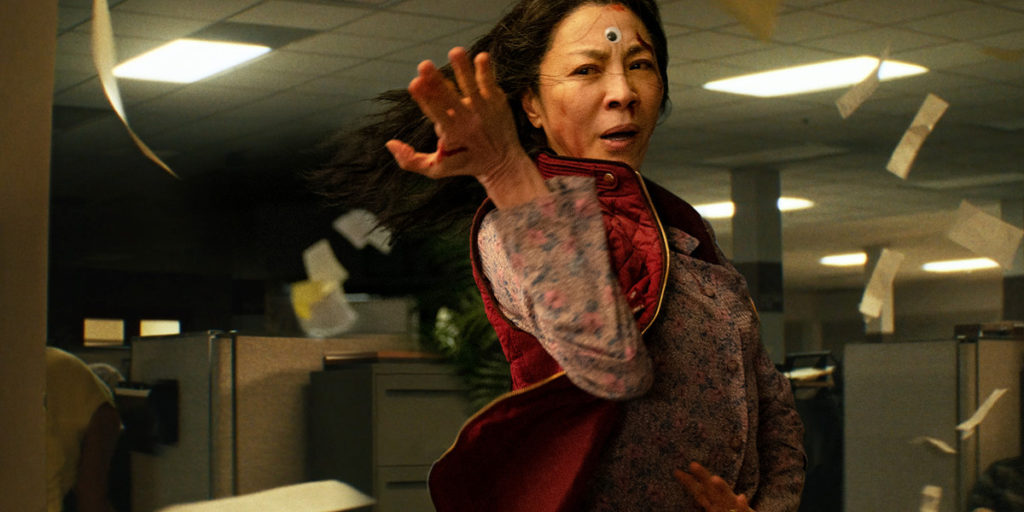 When an interdimensional rupture unravels reality, an unlikely hero must channel her newfound powers to fight bizarre and bewildering dangers from the multiverse as the fate of the world hangs in the balance.

Alternate realities aren’t just for superhero movies! Yep, Everything Everywhere All at Once uses the multiverse concept to dizzyingly impressive effect. The result is a mind-bending assault on the senses that will have you laughing, crying, and cheering in your seat. This is such a unique movie-going experience folks, one that is quite literally a trip (no added substances needed). What Dan Kwan and Daniel Scheinert have created is really something special. The actors involved also deserve much of the credit, as they each bring wonderful charm and commitment to their many roles (and I mean many roles… for each of them). Michelle Yeoh is especially outstanding, going from an emotionally stilted and over-worked mother to a butt-kicking action hero. It’s very impressive. The special effects team also needs praise, as the small, but mighty, crew of 5 do things that the big superhero-inhabited studios haven’t come close to achieving. In short – it’s a visual feast for the eyes. Admittedly, the movie does drag a tad too much near the end, eventually giving way to a predictable (albeit enjoyable) conclusion. Listen, this is a movie that needs to be seen to be believed, and you’ll be immensely happy you laid your eyeballs on it!

MrHollywoodMD · Mr. Hollywood's Review of SONIC 2, EVERYTHING EVERYWHERE ALL AT ONCE, & AMBULANCE