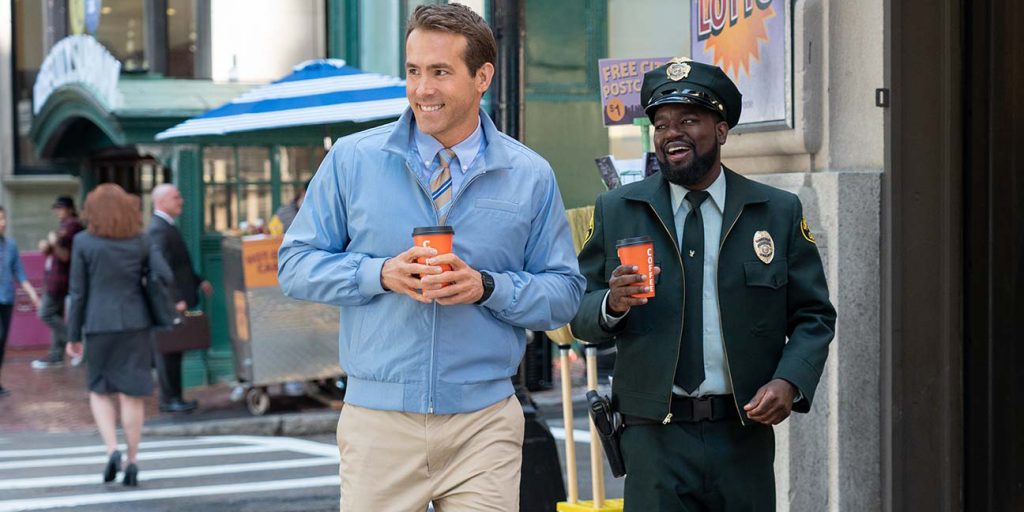 In the open world video game Free City, Guy is a non-player character (NPC) working as a bank teller. Thanks to a program developed by programmers Millie and Keys inserted into Free City by the publisher Antwan (Waititi), Guy becomes self-aware of his world being a video game, and takes steps to make himself the hero, creating a race against time to save the game before the developers can shut it down.

A mix between Ready Player One, The Truman Show and West World, Shawn Levy’s Free Guy makes for an absurdly fun viewing experience! Seriously – there is way more to the film (and premise) than you might think. Yes, it’s stuffed with all the over-the-top / in-your-face action set pieces you can handle, but what if I told you there’s also a genuine love story at hand? And dare I say, the heartwarming romance is actually played more effectively than half the rom-coms I’ve seen. Of course, one of the biggest things this movie has going for it, is its humour – and in turn, Ryan Reynolds. Ok, so it’s not as biting as say Deadpool, but Reynolds' trademark witty charm (and there’s a lot of it here) makes Free Guy that much more enjoyable. The affable actor has such a likeable way about him, that his schtick never gets old throughout the 2-hour runtime. Add in a scene-stealing turn by Taika Waititi, solid stuff from Joe Keery and Jodie Comer, not to mention a flurry of inspired cameos, and you’ve got one heck of a blast for a cast. There’s also something to be said for the look of the film. The video game world is bubble-gum bright and filled with dynamic colour splashes and visual delights. And with those visuals even getting Inception-esque at times, Free Guy becomes a big-time blockbuster through and through. And it’s certainly one you should jump into!

Venom: Let There Be Carnage
$9.1 million