SHADOW IN THE CLOUD – “A pulpy period thrill ride” 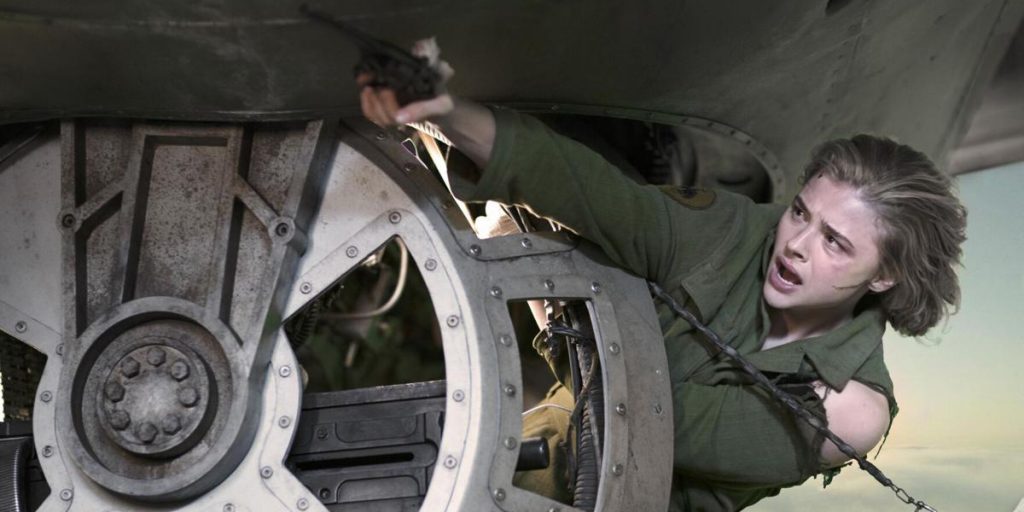 In the throes of World War II, Captain Maude Garrett joins the all-male crew of a B-17 bomber with a top-secret package. Just as her quick wit is winning them over, strange happenings and holes in her backstory incite paranoia surrounding her true mission. But this crew has more to fear... lurking in the shadows, something sinister is tearing at the heart of the plane.

A pulpy period thrill ride, Shadow in the Cloud may very well be the most offbeat viewing experience you’ll have this year. And that’s certainly not a bad thing, as director Roseanne Liang has crafted a very unique genre mashing spectacle that’s sure to leave a lasting impression.

Almost entirely set aboard a New Zealand military bomber jet, the film combines elements of monster horror with wartime action. There’s also plenty of mystery, intrigue, and humour to go around as well. And while things progress in some rather outrageous directions the longer it goes on, the movie never takes itself too seriously – no doubt working in its favour. But, just because things fall off the proverbial cliff of plausibility, doesn’t mean the thrills are any less effective. At least two sequences in particular are sure to leave you white knuckled and on the edge of your seat. The fact that everything is transpiring at 38,000 plus feet only adds to the adrenaline-fueled rush.

Of course, the key to making this all work is the performance of our leading actress, Chloë Grace Moretz. No stranger to portraying gender defying characters, Moretz is once more exceptionally believable in the role of a tough as nails heroine with incredulous odds to overcome. With the camera locked on her face in nearly every single scene, the young actress deserves major credit for all the heavy lifting she does in the acting department. And while the rest of the cast is more than serviceable, they do most of their acting vocally, given the majority of their dialogue is heard through the aircraft’s radio system. That of course being a feat in and of itself. The other character that merits mentioning is the mysterious gremlin creature tormenting our Allied crew. Let’s just say the special effects department didn’t skimp on the creepy details.

But alas, the film loses points for the lazily drawn-out information dump that gets unloaded on us at the midway point. While it certainly delivers the necessary story components, it’s a shame the writers didn’t go about it in other ways. A sparse spreading of little narrative pieces here and there would have sufficed over the large dump truck worth of exposition we get all at once. Again, credit to Moretz for carrying the audience through it and hitting all the necessary emotional notes in the process.

Luckily, the feminist social commentary is a little more subtle. That is until the end credits though, where we are treated to an overt celebration of women in the military. So yes, while one might see Shadow in the Cloud as just a feature length episode of the Twilight Zone on steroids, it packs a lot more substance for those willing to look for it. But, if it’s just Gremlin punching action you crave, well, it’s got that in spades!

MrHollywoodMD · Mr. Hollywood's Review of PIECES OF A WOMAN, and SHADOW IN THE CLOUD