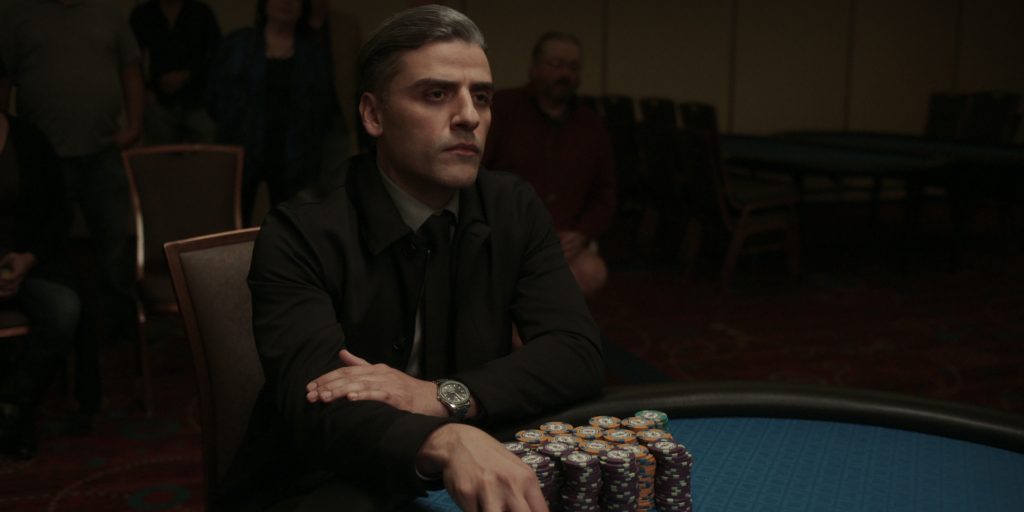 William Tell is a gambler and former serviceman who sets out to reform a young man seeking revenge on a mutual enemy from their past. Tell just wants to play cards. His spartan existence on the casino trail is shattered when he is approached by Cirk, a vulnerable and angry young man seeking help to execute his plan for revenge on a military colonel. Tell sees a chance at redemption through his relationship with Cirk.

A cerebral royal flush, Paul Schrader’s The Card Counter is one film you should definitely go all in for. I mean, who else but Schrader to profoundly marry such themes as trauma and wartime torture with the high stakes of casino poker? Making a powerful argument for a broken America, the movie is as introspective as it is intense. And much of the film’s intensity rests on the shoulders of our lead, Oscar Isaac. It’s a wholly complex role for the actor, one filled with subdued hurt, rage and an overwhelming desire for redemption. Luckily, Isaac carries it all with a measured hand, hitting all the right notes along the way. He gets some help mind you, from the likes of Tye Sheridan and Tiffany Haddish – the latter being a surprise standout (seriously, more dramas for Tiffany Haddish please). But, it’s admittedly quite the heavy watch at times, never removing its (ahem) poker face. Levity is not Schrader’s M.O. however, and the questions surrounding morality and justice will weigh heavy on you throughout - as it does our protagonist. If it’s a nail-biting “poker flick” you’re after, well, it’s got plenty of that going on too. There’s clearly a love for the game here. So, I say pull up a seat at the table and prepare to be dealt a hand full of captivating gravitas with satisfying results!

MrHollywoodMD · Mr. Hollywood's Review of THE CARD COUNTER, AFTER WE FELL, and KATE