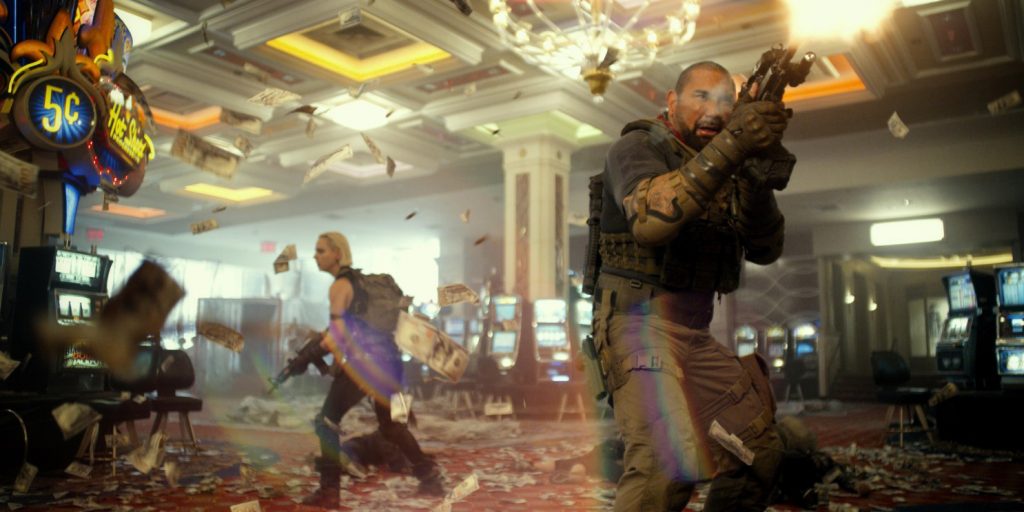 After a zombie outbreak in Las Vegas, a group of mercenaries takes the ultimate gamble by venturing into the quarantine zone for the greatest heist ever.

Zack Snyder’s renaissance (the Snyder-ssance?) continues with Army of the Dead - a blockbuster-sized blast of blood and guts entertainment! Yep, part Oceans 11, part The Walking Dead, and part Suicide Squad, this is one ambitious mashup that adds up to sheer fun. The genre-mashing works wonders in the action department too, allowing for a brisk pace of enjoyable mayhem from the opening minutes to the closing credits. And, with a runtime close to 2 hours and 30 minutes, it doesn’t feel it (for once). The ragtag group of characters are also easy to root for (or against), with Dave Bautista leading the charge in an impressive manner. The former pro-wrestler has really come into his own as an actor, once more proving himself by encompassing all the action hero traits one can handle. Some of the other on-screen players could have used a bit more in the way of character development, however. But, I suppose, most people aren’t going into a zombie/heist film looking for in-depth character psychoanalyse. The overall look of the film definitely deserves praise though, as Snyder once again infuses the proceedings with his uniquely dynamic visual style, full of vivid pops on the colour palette. It’s all very in-your-face and bombastic, as is the film’s rockn’ soundtrack. Much like Las Vegas itself, over-the-top entertainment becomes the name of the game here – and they nail it!

MrHollywoodMD · Mr. Hollywood's Review of ARMY OF THE DEAD, and THE DRY